The U.S. hosts a globally imperiled ecosystem that too few of us recognize: the Oak Savanna. This parklike ecosystem was once a ubiquitous grassland of the Midwest, and it’s not too late to bring it back.

Savannas are special places, and it is not an exaggeration to say that all people are drawn to them in some way. When you think of sitting outside on a warm summer day, chances are that you are picturing yourself in a savanna whether you know it or not. These sun-dappled meadows overhung by majestic shade trees are so ingrained in us that we create them wherever we go. After all, our yards and parks with their turf lawns and shade trees are just man-made savannas designed long ago to echo the natural article.
The Belwin Conservancy
Minnesota

To talk about oak savannas, let’s start by defining a few terms:

In the Midwestern U.S., the dominant oak tends to be the bur oak and its associates.

Before Europeans colonized the Americas, an estimated 12 million hectares of oak savannas stretched throughout the Midwestern United States. Oak woodlands may have been even more prominent than that. As of 1986, less than 0.02% of the savannas remain.

In 1995, Midwestern oak savannas were identified as critically endangered ecosystems. It’s hard to spot remnants of these habitats, but efforts continue to grow as awareness grows. (Check out the Savanna Oak Foundation‘s resources for identifying and managing degraded oak savannas.) Still, only about 30,000 hectares remain. 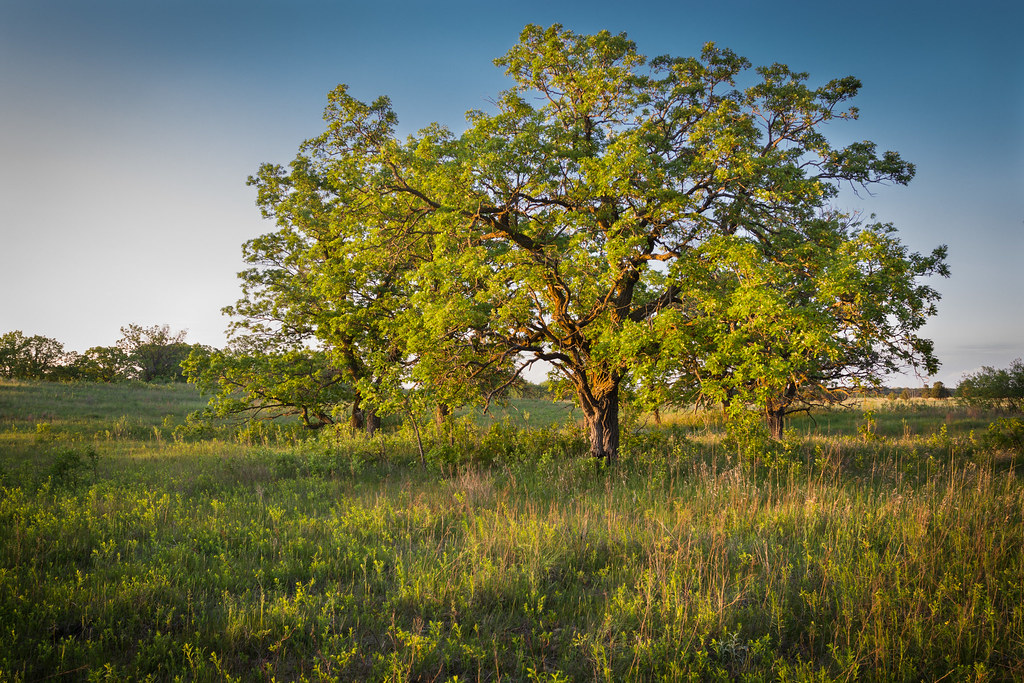 Because the oak savanna has sun-loving prairie plants, shade-tolerant woodland plants, and unique savanna specialists, the plant diversity is incredible. And of course, with increased plant diversity, wildlife blooms too.

The plant ecology is a whole world, and in my mind the more interesting story is that of the Bur Oak and its ecology. Bur oak tends to associate with chinkapin and pin oaks, and the tallgrass prairie grass big bluestem.

Some species are considered indicators for this savanna type too, including Culver’s Root (pictured), Jacob’s Ladder, and others.

For more on the wildflowers, shrubs, and grasses of the midwestern oak savanna, peruse these lists: 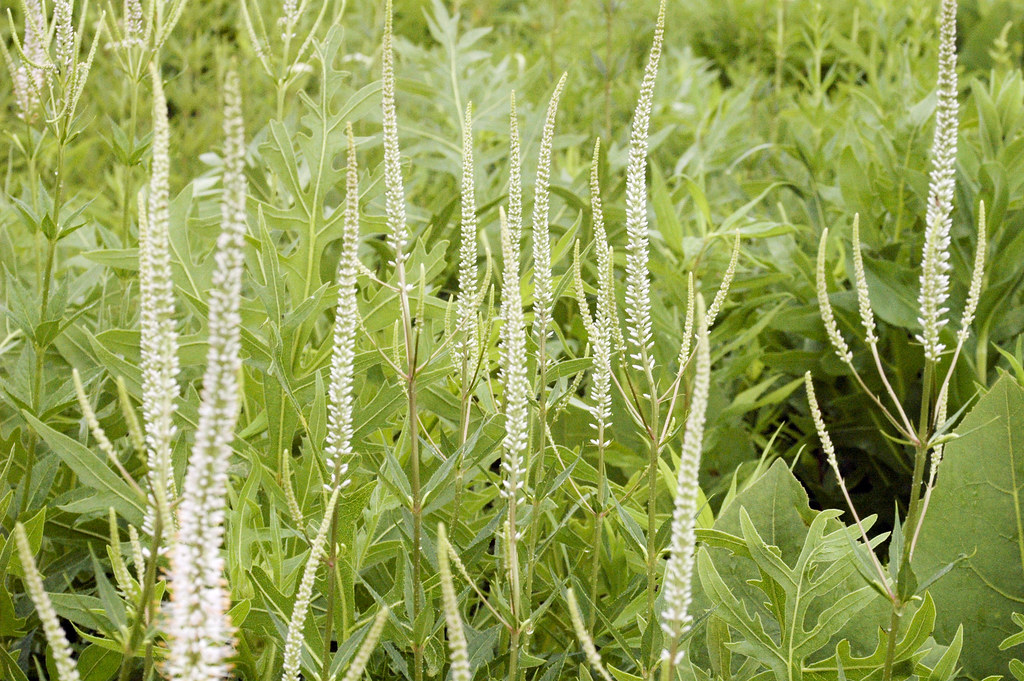 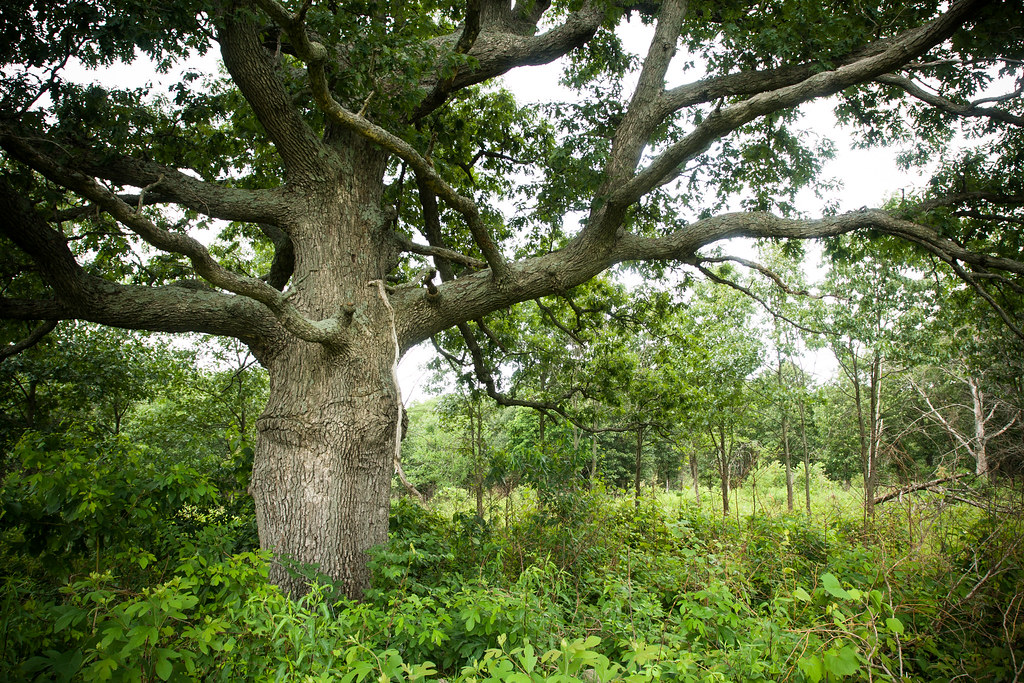 To really understand the oak savanna, we have to meet the prime oak savanna tree: Bur Oak. The bur oak is…

In fact, the bur oak becomes fatally weakened under deep shade. Without sun, the lower branches die back and wood rot sets in. The tree dies within 80-100 years when the trees around it are too dense.

Because the oak savanna appeals to sun-loving prairie plants, shade-tolerant woodland plants, and unique savanna specialists, the plant diversity is incredible. And of course, with increased plant diversity, wildlife flourishes too.

In other words, oak savannas seem to be an ideal place for a variety of species to raise young, because of the unique variety in resources and protection they offer youngsters.

Wildlife also feeds on the bur oak. The delicious acorns are, of course, a huge part of that. Acorns from white oaks like the bur are preferred by humans too. Black bears, deer, elk, rodents, turkey, and a number of others feast on the acorn crop. Red-headed woodpeckers will migrate out of Kansas when bur oaks don’t produce acorns.

Young oaks get eaten too. Livestock and wildlife browse on young plants, sometimes eating them to the ground.

The Importance of Fire

For bur oaks and their savannas, fire is absolutely critical.

Mature bur oaks aren’t typically damaged by fire, but even trees as small as 3 feet might survive. Here’s how they do it.

The only period of time when bur oaks are really susceptible to being killed off by fire is during their acorn stage, before they’ve ever sprouted.

Oak litter and wood is extremely flammable and long-lasting compared to other hardwoods. Unlike typical hardwoods that produce thin leaves that stick to the forest floor and create thick beds of moisture, the bur oak’s curled, rigid, thick shape creates a long-lasted bed of loose, fuel with pockets of air. This burns readily and allows wind to carry and spread the fire further. These leaf traits also mean they can last as a fuel bed even after snow melt, so they can even feed spring fires.

Finally, like other oaks, the woody debris of this species doesn’t break down quickly. So compared to other hardwood habitats, oak savannas provide lots of long-lasting woody fuel too.

The Savanna's Fate without Fire

The bur oak loves fire because the bur oak’s livelihood revolves around the presence of fire. Grassland habitats where disturbances change are subject to succession, or transitioning into other habitat types. Oak savannas transition in a couple of ways.

Prairies transition to woodlands. Without fires, bur oaks and grubs dramatically spring up and take over a prairie. If there are 10 or more years between fires, bur oaks begin to take over. Studies have shown that without frequent fire, bur oaks invade the prairie at about 1 foot every year.

Oak savannas transition to forests. And as this transition occurs, the bur oaks die off. Bur oaks are sun-loving and shade intolerant. This is an indirect relationship with fire, but an important one ecologically.  Without fires to knock back other woody plants, eventually the bur oak cannot survive. In about 80 years, the shade kills off the lower branches in large mature bur oaks, and they become weakened by wood-rot fungi. Most are snapped by wind storms after about 100 years.

Besides fires, treefalls and browsing can also affect bur oak survival and succession of habitats. In order for bur oaks to re-establish in a forest, trees have to be knocked down to create pockets of sunlight. And because livestock will graze the youngest bur oaks to the ground, heavy grazing can stop the recruitment of new trees to a savanna or prairie ecosystem. 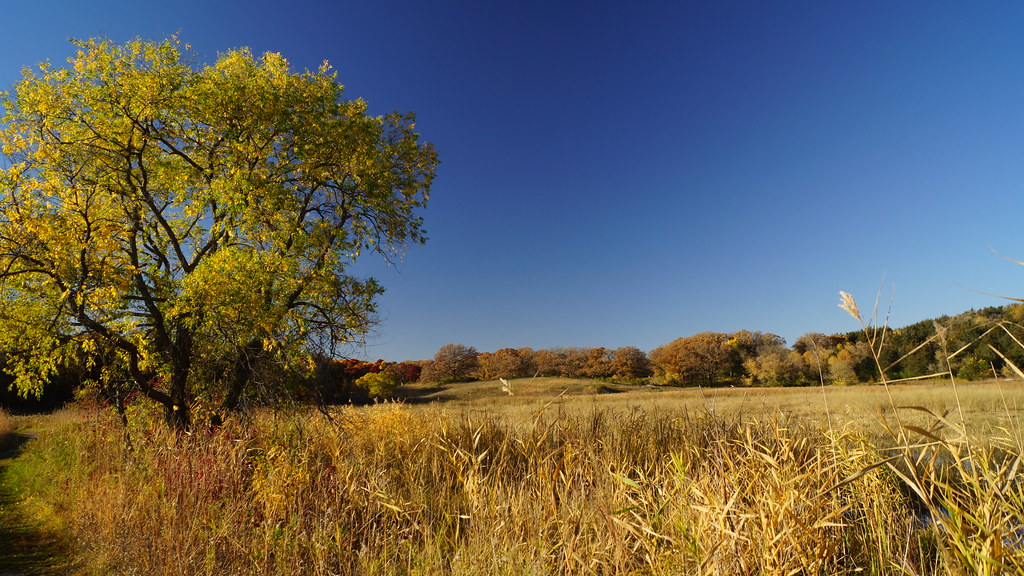 The Importance of People

Losing fire lost us the bur oak savanna. The biggest causes of that fire loss?

The first piece of that explanation is the most critical. The loss of indigenous land management and burning practices, which was subsequently replaced by European land use practices, cost North America this massive savanna.

Oak savannas in the Midwest do predate humans. Fire frequency was fairly low, estimated at once every 10-50 years as they occurred through natural means. In the 12,000 years since humans arrived, though, the much more frequent fires on the landscape were managed by indigenous people.

There’s a widespread myth that fires are largely started by lightning on the great plains, but studies have long revealed this as a lie erasing the important maintenance work of American Indians on prairies and oak savannas in the Midwest.

Here are a few examples.

In the Black Hills, studies show that the Oglala Sioux used fire more frequently than the Cheyenne, Kiowa, and Crow tribes. Before 1770, large fires occurred in the Devil’s Tower National Monument Area about every 27 years. From 1770 to 1900, that changed to 14 years. This coincides with the Oglala Sioux taking over the area, which had been controlled by the Cheyenne, Kiowa, and Crow before. After 1900, the average time between large fires increased dramatically to 42 years. The last area-wide fire occurred in 1937, when the area was already settled by Europeans.

In an oak savanna remnant in Wisconsin, 53% of fire scars occurred during the dormant season. Lightning-caused fires typically occur in the summer, so to researchers this suggests a human ignition source. They reconstructed the fire history from the cross sections of 150+ year old bur oak and white oak trees already being cleared for an industrial park. In presettlement years, fires returned about every 3.7 years. During the peak of European American settlement, this increased to 19.5 years.

As people living on the land change, fires change with them.

The takeaway: the loss of bur oak habitats with European settlement, which typically coincided with reductions in fire frequency or severity, is well documented across the range of oak savannas. For the oak savanna, maybe that’s a positive lesson to take away: we have all the power we need to restore these habitats, because management was the key to their success in the past. 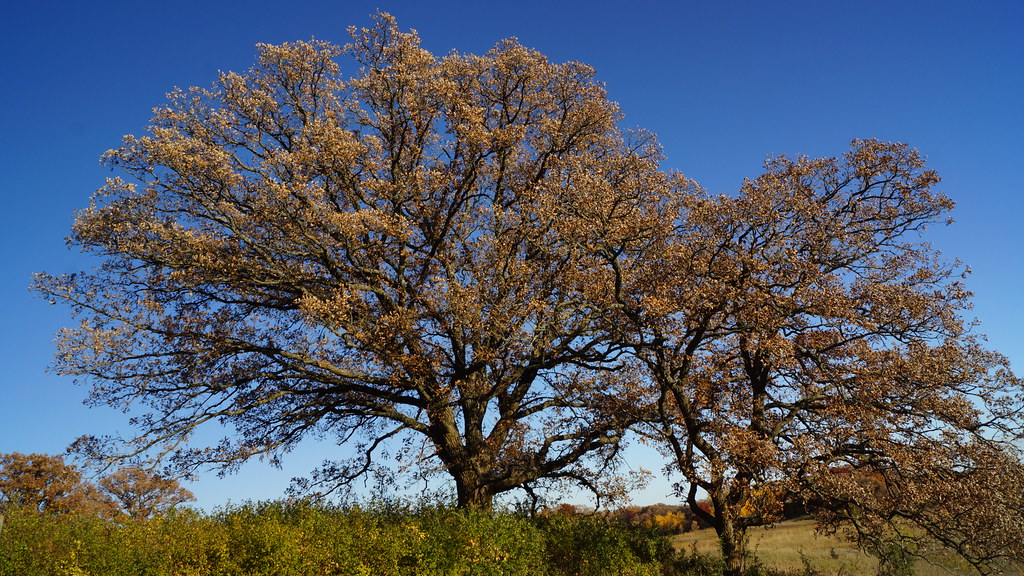 Restoring oak savannas is possible. In the Midwest, where millions of acres are now closed-canopy forests, it will take more than burning to restore these lost habitats. Effective habitat restoration and management plans are available, and so are many success stories.

It’s not too late for our major North American savanna. The first step is introducing a little love.

The Best Biome: a podcast for grassland lovers

Did you spot an error or have questions about this post? Email Rachel Roth.